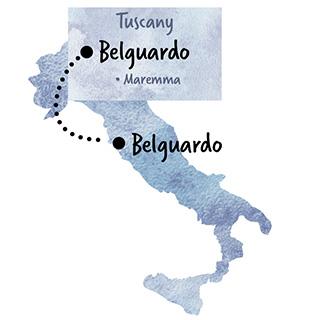 Named after Tyrrhenus, a charismatic and fearless prince of the Tyrrhenoi who led his people to central Italy and founded the Etruscan civilization and early wine culture. The Belguardo vineyards overlook the Tyrrenian sea and benefit from its gentle sea breezes, which inspired the wrapped label design. This wine reflects the brilliant expression of Bordeaux grapes grown in the Maremma.

Belguardo comprises a total of 70 hectares (173 acres). The vineyard area is planted at altitudes ranging from 70-130 meters (230-426 feet) above sea level, with south/southwest exposure. The well-drained soil comprises of limestone and sandstone rocks.

The grapes are hand-harvested in September. The grapes undergo temperature-controlled fermentation in stainless steel tanks at 82-86ºF and maceration for 16 days.

Ruby red in color. On the nose, ripe, red cherries, dried flowers such as lavender with herbal notes and spice. The palate demonstrates intensity, elegancy, and vibrancy with blackcurrant notes, a firm structure and a savory finish. Pairs well with pasta in a meat sauce, grilled meats and stews, and roasted vegetables.