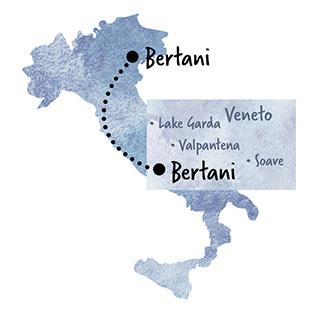 This amarone is produced in the Valpantena hills, north of Verona. Valpolicella is a continental climate with a strong Mediterranean influence due to the proximity of Lake Garda. In Summer, days are hot and humid and fresh and windy at night. The night weather contributes to the development of a typical peppery character in the wines from Valpolicella.

Vineyard soils in Valpolicella consist of white limestone (calcium carbonate) and red limestone soils (Iron + Manganese), which create salty (not mineral) wines.
The vines are vertical-trellised and Guyot-trained, with a planting density of 2,024 plants per acre. Hand harvest is carried out in the middle of September.

The best grapes are selected so that only the healthiest and ripest bunches are sent to the drying rooms in the historic winery at Grezzana, where they are laid out in single-layer crates. In mid-January, the grapes are destemmed and crushed, then fermentation starts, at first at a temperature of 39°F- 41°F, which then reaches 72°F in the final stages.

Partly aged in Slavonian oak barrels with an average capacity of 25 hl, and a small part in barriques for about 30 months. Bottling is followed by at least six months of maturation.

Intense aromas of cherries and blackberries with spice notes of cinnamon and pepper. On the palate the wine has an enveloping, soft and creamy mouthfeel with a persistent finish, accented with fleshy tannins. Pairs well with rich dishes, mature cheeses and strong-flavored meats.