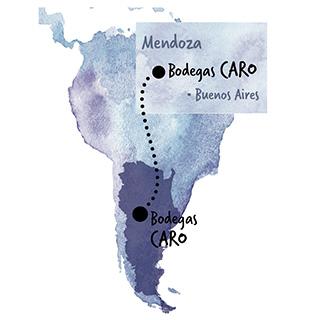 For its tenth anniversary, Bodegas CARO chose to celebrate the grape that has come to symbolize Argentina’s vineyards by selecting a pure Malbec: ARUMA! Originally from France, Malbec (Cahors) was introduced to Argentina by a Frenchman, Jean Pouget, in 1868, which coincidentally was the same year James de Rothschild purchased Château Lafite. A very fruity, exuberant, powerful grape, Malbec has adapted wonderfully to the Mendoza region where the sunshine and cool nights soften its tannins and reveal its velvety-smoothness. “ARUMA” means the “night” in the language of the Quechua, the native Indians of the Mendoza region. We chose this name because it is the intense darkness of the nights in the Andes and the pure mountain air that give the wines the rich, authentic character of their terroir. ARUMA - the wine of the mountain nights.

Sheltered from the rain by the mountains to the West and the Pampa to the East, the region is very arid. Mendoza wines draw their character from an exceptional sun exposure and wide temperature variatons between night and day.
The season started out a bit late; there were a few nights of frost during spring, but they did not damage the buds. Spring was mostly characterized by wet and cold conditions, which led to delayed growth. Overall, flowering and fruit set were good. During the summer, especially in January and February, temperatures were uncommonly lower than average and without the usual heatwaves that characterize the Mendoza climate. The ripeness period was marked by rainfalls: intermittent showers alternating with sunny days characterized this final period before harvesting. These conditions during maturity required the winegrowers to monitor the development of mildew or botrytis, in order to correctly anticipate the decision to harvest.

Grapes were harvested by hand, carefully selected, destemmed and crushed before being placed in stainless steel tanks for fermentation. A traditional winemaking process ensued with pump-over and delestage. Total maceration time lasted from 12 to 15 days.
Aruma is aged in tanks in order to preserve its fruit-driven style and allow the varietal characteristic of the Malbec to come through.

Intense deep red color. The nose reveals aromas of plum and red fruit. On the palate, the wine is round and fresh with remarkable balance between tannins, acidity and alcohol, with a long, delicate finish.