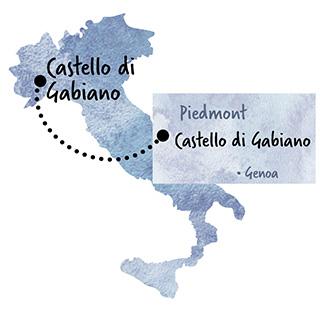 Castello di Gabiano, situated in the Monferrato production region of Piedmont, dates back to the 8th century, at the time of Charlemagne (Italian trans. Carlo Magno), Emperor of the Romans. In a signed document, he indicated the presence of a “Cortem magnam nomina Gabianam,” proving the land has been owned by the Gabiano family since that time. Today, Giacomo Cattaneo Adorno, the last Marquis of Gabiano, and his wife, Emanuela, manage the estate and produce wines from mainly Barbera, as well as Freisa, Grignolino and Malvasia for the red wines and Chardonnay and Sauvignon Blanc for the whites. Passionate and determined, Giacomo and Emanuela are committed to capturing the beauty and structure of Monferrato in every bottle of wine, blending traditional and contemporary winemaking practices.

The Monferrato appellation is a hilly area situated among the Po and Tanaro rivers, boarding the Apennine Mountains. An ancient winemaking region dating back to 1200 BC, is was a prized production area for the Roman empire. The Castello di Gabiano estate has been producing wine for just as long, with natural cellars dug into rock, which are still in use today. Sitting at 300m a.s.l. the estate’s vineyards - some dating back 100+ years - are covered in ancient sea sediments and composed of chalky lime soil. Classified as a “white soil” type, this is perfect for the Grignolino variety, a finicky growing grape that often poses a challenge for winemakers due to its delicacy.

Grapes yield 7.7 tons/hectare. They are hand harvested and collected in small boxes. In the cellar, alcoholic fermentation is carried out in cement vats at controlled temperature. The wine rests on its lees for an average eight months before transfering to wood. Aged for sixteen months, 50% in barriques and 50% in big barrels, followed by an additional six months in bottle.

A very light red, this could be mistaken for a deep rosé. Delicious slightly chilled, Il Ruvo is a lovely match with a wide variety of appetizers salumi and antipasti, fish and white meats. Because of it’s light tannin structure, this is a great wine to pair with most Mediterranean and Asian cuisine centered around raw fish and aromatic herbs.