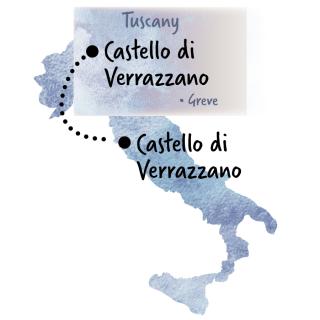 Since acquiring the estate, the Cappellini family has replanted Verrazzano’s vineyards, which fan out from the forest limits down to the valley below. They farm organically and have been certified since the 2014 vintage. Located on a hilltop in the Greve, the heart of Chianti Classico, Verrazzano’s 230 acre estate includes 128 acres of vineyards at altitudes between 920 and 1300 feet above sea level, higher than average Chianti Classico vineyards. Though present in southern parts of the Classico area, limestone is unique to Verrazzano which is in the cooler, northern part of the zone. This singular combination of limestone soil and cooler growing conditions accounts for the wine’s muscularity and finesse. The true lifeblood of the vineyards comes from the surrounding Verrazzano-owned woodland area, which acts as a cocoon for the vines; offering pollution protection and maintaining freshness. In addition, the entire winery is heated by wood from these forests.

Estate grapes are hand harvested and fermented in small batches at a controlled temperature. The maceration period is 20 days with delicate, frequent pumping over. Aged in barrique (75% Allier – 25% Vosges) for minimum of 18 months, followed by large barrel aging for a minimum of six months. The wine further refines in bottle 6 months before release.

Deep ruby red in color. This wine opens with a pronounced nose of small red fruits, black wood fruits, such as blackberries, and vanilla and oak. Elegant, rich and silky with soft tannins and background notes of vanilla and chocolate.