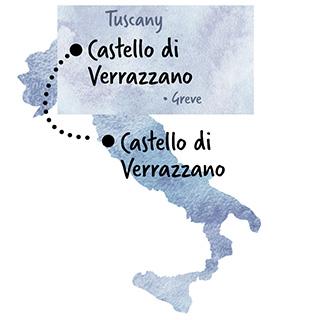 Since acquiring the estate, the Cappellini family has replanted Verrazzano’s vineyards, which fan out from the forest limits down to the valley below. They farm organically and have been certified since the 2014 vintage. Located on a hilltop in the Greve, the heart of Chianti Classico, Verrazzano’s 220 acre estate includes 128 acres of vineyards at altitudes between 920 and 1300 feet above sea level, higher than average Chianti Classico vineyards. Though present in southern parts of the Classico area, limestone is unique to Verrazzano which is in the cooler, northern part of the zone. This singular combination of limestone soil and cooler growing conditions accounts for the wine’s muscularity and finesse. The true lifeblood of the vineyards comes from the surrounding Verrazzano-owned woodland area, which acts as a cocoon for the vines; offering pollution protection and maintaining freshness. In addition, the entire winery is heated by wood from these forests.

Grapes are harvested by hand at the end of September to mid-October and undergo a 10-14 day maceration period. The wine is aged 12 months in French oak barrels and refines in bottle an additional four months prior to release.

On the nose, intense and persistent; aromas of cherry and blackberry with floral notes - red roses, specifically. Dry with soft tannins and refined red fruits with a trace of mint on the mid-palate.