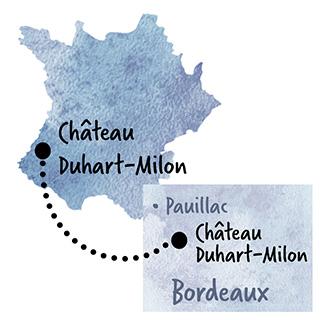 The Rothschild family acquired Château Duhart-Milon, a “Quatrièmes Cru” in the 1855 classification, from the Castejas of Pauillac, in 1962. The property was named after the Sieur of Duhart, gun-runner to Louis XIV, who originally owned the property, and from the name of the little hamlet of Milon which separates the Duhart-Milon vineyard from that of Château Lafite. Moulin de Duhart, Château Duhart-Milon’s second wine, is selected from vats of the “Grand Vin”. In general, the grapes are from the youngest part of the vineyard. Moulin de Duhart has several characteristics similar to the fine wine, but with a lesser potential for ageing as its ageing in barrels is much shorter. The vineyard covers 187 acres and is planted with Cabernet Sauvignon (67%) and Merlot (33%).

Harvesting the Merlot (planted on gravelly soil) started on September 19th. Vines growing on clay were ready a short time later. Once again this year, there was excellent complementarity between the Merlot grapes from the gravel plots (riper) and those from the clay plots (fresher and later ripening); this allowed for plenty of maturity of this grape variety, which accounts for a third of the blend, while at the same time preserving the freshness of the fruit. The Cabernet Sauvignon vines seemed to be better prepared for the heat this year; the ripening process was not checked in July despite the heatwave, and there was then a progressive evolution of the berries during the more temperate weather in August. A little rain in mid-September was very beneficial for the end of ripening stage on Duhart-Milon’s gravelly soil, which is more arid than the Lafite plateau.

Moulin de Duhart is vinified using the traditional methods for the great Médoc wines, with destemming and crushing of the grapes before fermentation in concrete and stainless-steel vats. Fermentation takes place at a controlled temperature of 86°F, followed by maceration for about ten days. After malolactic fermentation, the wines are transferred to two-year-old French oak barrels and aged for 12 months.

After malolactic fermentation, the wines are transferred to two-year-old French oak barrels and aged for 12 months.

Beautiful deep, dark color. The nose reveals superb roasted notes. These are followed by aromas of ripe red fruit, particularly fresh cherries. On the palate, the notes remain delicate. The wine gradually develops body while remaining very well-balanced. The hint of sweetness on the finish is characteristic of the 2019 vintage.