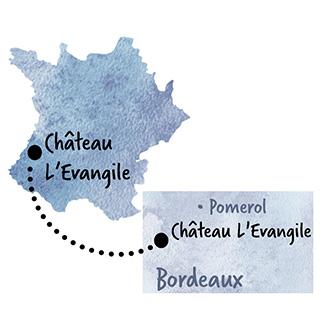 In 1990, Domaines Barons de Rothschild (Lafite) acquired L’Évangile from the Ducasse family with a view to ensuring that the property was looked after to the same high standard. DBR (Lafite)’s initial influence included a more refined selection of the Grand Vin, and the creation of Blason de L’Évangile as a second wine. Efforts were also undertaken to improve the vineyard with a restoration and partial renewal plan that was launched in 1998. The complete renovation of the vat room and the cellar was finished in 2004.

Chateau L’Evangile has had a long and illustrious history in Pomerol. In the second edition of Cocks Féret in 1868, L’Évangile is listed as a “Premier Cru du Haut-Pomerol”. The estate first appeared in the 1741 land registry under the name of “Fazilleau”, remaining until the mid 18th century and then as L’Evangile after its then owner “Isambert” renamed the estate in 1862. The vineyards of the 54 acre property in the heart of the Pomerol Plateau, surrounding the Château, have a curious long strip of deep gravel beds pitted with sand and clay. Famed neighbors Château Cheval Blanc are to the South and adjacent to Chateau Petrus on the North.

Spring was grey and wet, resulting in late, problematic flowering. July was dry and sunny followed by an overcast August which helped preserve a fine freshness. September and October had exceptional weather enabling the grapes to fully ripen.

Harvest’s took place from September 29th to October 14th for the Merlot and October 6th - 13th for the Cabernet Franc. Pumping over and maceration times were adapted to each vat, according to the plot and the level of ripeness of the tannins. Alcoholic fermentation took place in temperature controlled concrete and stainless steel vats for 10 days. Maceration lasted 25 to 28 days, depending on the plots. Malolactic fermentation was carried out in 100% in new barrels.

The wine was aged for 18 months: 75% in new barrels and 25% in barrels of one wine crafted at the Tonnellerie des Domaines cooperage in Pauillac.

Dense, dark color with hints of violet. Intense nose with mocha, stone fruits, violets and spices. Generous and full-bodied in the mouth, with a powerful, harmonious texture. Smooth finish with lots of very soft tannins that remain dense without being aggressive.