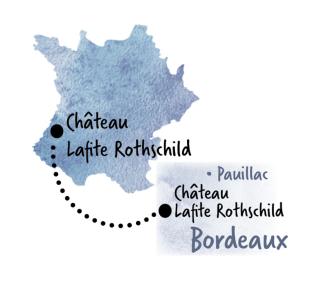 Château Lafite Rothschild is one of only five classified first growths and thus the designation as 1st er Cru. The vintage rankings of the Universal Paris Exposition in 1855 officially gave Lafite the rating as “Leader among fine wines.”

The vineyard covers 264 acres and is divided into three separate areas: the hilly ground close to the Château, the plateau of the Carruades and a plot in the commune of Saint Estèphe (special permission was granted to incorporate these wines into the Pauillac appellation). The soil is composed of fine gravel mixed with aeolian sand and planted with four classic Médoc grape varieties: Cabernet Sauvignon (70%), Merlot (25%), Cabernet Franc (3%) and Petit Verdot (2%). The average age of the vines is 35 years but those that produce the Grand Vin selection are 45 years or older. The oldest plot, “La Gravière”, was planted in 1886. In August 1868, Baron James de Rothschild purchased Château Lafite and it has remained in the family for five generations. The property is currently run by Baron Eric de Rothschild.

The village of Anseillan lies to the east of Lafite Rothschild, between the Château and the Gironde. This area presents a wide variety of terroirs which are the subject of much thought and research. Cooler and later because of their northern exposure, they are also more clayey than Lafite’s classic terroirs. This particularly interesting diversity offers plots that are suited to Cabernet Sauvignon, Cabernet Franc and Petit Verdot. This terroir and the teams’ work gives Anseillan a unique style and excellent complexity.

On the eve of the celebrations marking the 150th anniversary of the acquisition of Château Lafite by the Rothschild family, the teams faced major challenges due to the capricious weather conditions. From December to July, unremitting rain increased the risk of mildew and hail. The summer really started in mid-July with very high, sometimes extreme heat, which helped to restore the vines’ health and set the path for a great vintage. New measures were taken to improve the selection of the batches in the Carruades vineyard for the 2018 vintage. Every possible effort was made to achieve greater precision and potential in the final blend.

Anseillan is made according to the traditional Bordeaux method. Alcoholic fermentation is conducted in wooden, concrete and stainless steel vats. Gentle pumping-over helps to ensure a soft extraction and is carried out according to the specific characteristics of each tank. Total maceration time lasts for about 20 days. After malolactic fermentation, wines are transfered into French oak barrels made by the Tonnelleries des Domaines in Pauillac for about 16 months.

Deep and dark in color, almost black. Nice brightness. Before aeration, the nose is already intense, a sign of the start of opening. After aeration, it becomes even more expressive with notes of cherries. Smoky notes of the barrel ageing can be distinguished, then spices from the Petit Verdot. Well-balanced on the palate, with lots of volume thanks to the Merlot, and a great structure and freshness brought by the Cabernet Sauvignon, which gives the length that is characteristic of Pauillac.