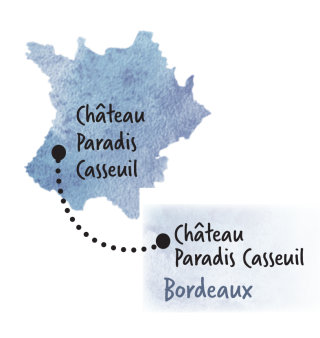 Château Paradis Casseuil holds its name from the land registry, where the main parcel of vines is known as “Les vignes du Paradis” – vines of Paradise. Casseuil is the name of the district. Is it because of its bucolic location, nestled on the hills overlooking the Garonne river and surrounded by beautiful forest? No one knows why such a heavenly name was given to the property, but the team has fully committed itself to honour it!

Château Paradis Casseuil formerly belonged to Château Rieussec. When purchasing the first classified growth of Sauternes in 1984, Baron Eric de Rothschild didn’t hesitate to add this jewel of the Entre-Deux-Mers to the deal. The vineyard of Paradis Casseuil was extended in 1989 to become one of the leading properties of the region.

Château Paradis Casseuil counts several plots, soundly located atop the hills overlooking the Garonne river. The clay-aluvium soils, known as boulbènes, are particularly suited to merlot. At Paradis Casseuil, these terroirs are complemented by some plots of sought-after asteriated limestone, which produce wines with great body and structure. The diversity of soils and the hilly landscape, which provides excellent sun exposure, contribute greatly to the quality and the complexity of Paradis Casseuil.

Vintage 2017 was marked by late frost on April 27th and 28th which caused severe damages in Bordeaux vineyards as well as other parts of France and Europe. The crop was characterised by considerable heterogeneity in quality in the properties affected. Nevertheless, quality was there for those who were not affected, which was the case luckily for Paradis Casseuil.

The wine is made in the traditional Bordeaux method. Alcoholic fermentation is conducted in temperature-controlled stainless steel tanks, with gentle pumping-over. After three weeks of maceration, the wine will be racked and placed in the tanks again to undergo malolactic fermentation.

Once malolactic fermentation is completed, the wine is aged for a period of six months, partially in oak, in order to add a touch of distinction whilst preserving the liveliness of the fruit.