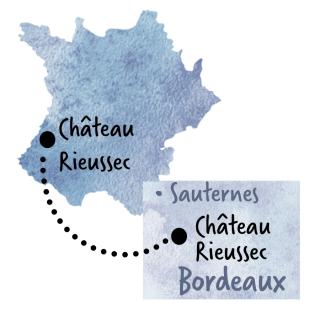 Classified as a First Growth in 1855. Rieussec is one of the biggest estates of Sauternes with 227 acres of vines, situated on the “communes” of Sauternes and Fargues, high above the Garonne River, in a small area where the cold Autumn dawns help form the famous mist. It is this mist which many believe plays a major role in the development of botrytis cinerea (noble rot). Château Rieussec is located in Fargues (adjacent to Château d’Yquem).

In the 18th century, the Rieussec estate belonged to the Carmes de Langon monks. Sold as a “national inheritance” after the French Revolution, Rieussec experienced several changes of owners before being acquired by Domaines Barons de Rothschild Lafite in 1984. Since then, meticulous plot selection and important innovative methods have been used in the cellars to enhance quality.

Château Rieussec, one of the largest properties in Sauternes and Barsac, is made up of gravel on sandy-clay soil.
The autumn and winter of 2019-2020 was one of the warmest of the last ten years in Bordeaux, resulting in an early bud break around March 20th. Frequent rain from April to June required measures to be taken against a significant threat of downy mildew. The vines stayed ahead of their usual growth cycle, flowering around May 19th. Then a fairly abrupt transition in the weather occurred, with 55 days without rain over the summer months.

Véraison (color change) started around July 25th. There was quite severe water stress in some parts of the gravel terraces. The soil on the hillsides and at the base of the slopes, and the limestone marl soil fared much better in the hot, dry weather. For the sweet wines, it was quite a challenge to find botrytized bunches. The sun-drenched grapes did not offer ideal conditions for botrytis and, after waiting until October 21, it was the Sémillon from the plots around the château that offered the best quality this year and which formed the heart of Château Rieussec.

Grapes are pressed as soon as they arrive at the winery. After settling, the musts are transferred to new barrels for fermentation. Grapes from each plot are pressed and fermented separately. At the end of fermentation, the wines are kept on the lees and stirred regularly until mid-December. After a resting period, the wines are racked and blended before being returned to the barrels to age for about 12 months.

Delicate nose with notes of rhubarb, peach and white flowers. The palate is light and yet voluptuous. The attack is fresh, with the same rhubarb as the bouquet. The smooth finish is characterized by buttery notes and a hint of muscat.