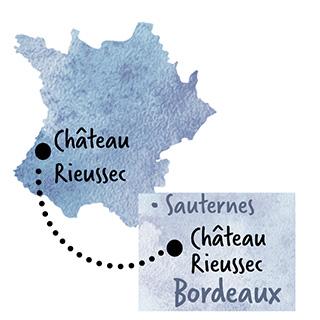 Classified as a First Growth in 1855. Rieussec is one of the biggest estates of Sauternes with 227 acres of vines, situated on the “communes” of Sauternes and Fargues, high above the Garonne River, in a small area where the cold Autumn dawns help form the famous mist. It is this mist which many believe plays a major role in the development of botrytis cinerea (noble rot). Château Rieussec is located in Fargues (adjacent to Château d’Yquem). In the 18th century, the Rieussec estate belonged to the Carmes de Langon monks. Sold as a “national inheritance” after the French Revolution, Rieussec experienced several changes of owners before being acquired by Domaines Barons de Rothschild (Lafite) in 1984. Since then, meticulous plot selection and important innovative methods have been used in the cellars to enhance quality.

Château Rieussec sits on the border of Fargues and Sauternes, bordered by Château d’Yquem to the West. Rieussec is one of the largest properties in Sauternes and Barsac, covering 85 hectares of gravel sitting on sandy-clay soils.
The vintage began well with a mild, dry winter. The fine weather continued into early spring, resulting in an early start to the growth cycle. Day and night temperatures then cooled down and, between March and May, there were six occasions of fear of frost. During this period, the colder and drier than usual weather slowed down the vines’ growth. After a relatively cold, rainy start, June suddenly changed, bringing an early summer heat wave. Fortunately, it was short-lived and the vines, which were catching up in terms of growth, seemed better equipped than in previous years to cope with the heat. Some miraculous rain arrived in late July, at just the right moment to trigger véraison (color change).
The rain in September was very helpful for the botrytis. But the harvests turned out to be more complex, with rigorous sorting required to keep the nicely botrytized ones. Early October was opportune to pick perfectly balanced grapes for the Grand Vin.

All batches were pressed individually in small pneumatic presses. After a few hours of cold settling, the must was transferred into new oak barrels from the Tonnellerie des Domaines in Pauillac for fermentation.
After fermentation, the wine was aged in barrels for 24 months.

Delicate golden color with soft green glints. Intense nose with tremendous aromatic richness. Initial notes of citrus zest are followed by lemon tart, and then toasted notes reminiscent of freshly baked brioche. The palate offers mandarin zest and candied orange, enlivened by a touch of star anise underscoring the wine’s aromatic freshness. Dense and rich, the palate has good length with a pleasant hint of bitterness on the finish.