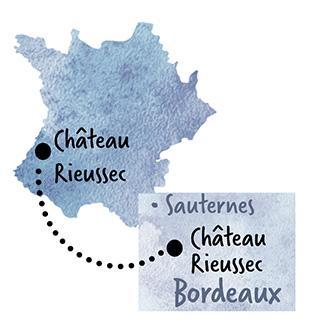 Classified as a First Growth in 1855. Rieussec is one of the biggest estates of Sauternes with 227 acres of vines, situated on the “communes” of Sauternes and Fargues, high above the Garonne River, in a small area where the cold Autumn dawns help form the famous mist. It is this mist which many believe plays a major role in the development of botrytis cinerea (noble rot). Château Rieussec is located in Fargues (adjacent to Château d’Yquem).
In the 18th century, the Rieussec estate belonged to the Carmes de Langon monks. Sold as a “national inheritance” after the French Revolution, Rieussec experienced several changes of owners before being acquired by Domaines Barons de Rothschild Lafite in 1984. Since then, meticulous plot selection and important innovative methods have been used in the cellars to enhance quality.

Château Rieussec sits on the border of Fargues and Sauternes, bordered by Château d’Yquem to the West. Rieussec is one of the largest properties in Sauternes and Barsac; the vineyards are gravel sitting on sandy-clay soils.
In 2021, frost affected the whole of France severely; Rieussec experienced the worst, with temperatures around 15°F. Spring arrived late yet the start of the vines’ growth went smoothly, with flowering taking place at the end of May in good conditions. June and July were rainy, with high humidity; patches of mildew began appearing on the vines. Véraison (when the grapes change color) began in mid-July, continuing into mid-August. Early September was bright and, as is sometimes the case in Bordeaux, this transformed the grapes and saved the vintage.

Grapes are harvested by hand in small crates. They are refrigerated prior to being brought to the press, which helps prevent oxidation. The pressing is gentle in order to retain the aromatic freshness of the grapes. Once the must has settled, most of the Semillon are placed in new oak barrels to undergo alcoholic fermentation, while the Sauvignon is predominantly fermented in temperature controlled stainless steel tanks.
Once fermentation is completed, the wines in barrels were aged on the lees for six months with regular stirring. After ageing the wines in stainless steel vats (50%) and in barrels (50%), they were blended prior to bottling.

Expressive, complex nose, underscored by a lovely freshness. Some notes of tropical fruit, predominantly passion fruit, followed by floral notes with a hint of aniseed,suggesting fennel and tarragon. The wine’s minerality and concentration are already apparent in the nose.
On the palate, the attack is round and full, with subtle notes of fresh butter, followed by superb notes of freshly cut wood which contribute to the wine’s concentration and purity. A sensation of minerality underscores the entire palate, with warm notes of flint, reminiscent of summer walks on the pebbles at Etretat beach. The finish is concentrated and long, balanced by a pleasant hint of bitterness.