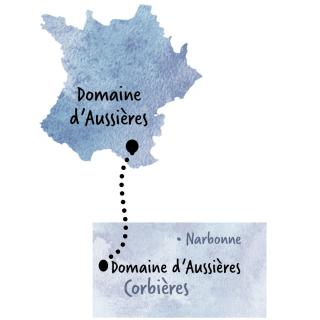 Due to its exceptional geographical location and unique wine-growing site and history, Domaine d’Aussières is one of those wild, natural places that gives an impression of great force and beauty. These words of Baron Eric de Rothschild explain why he fell in love with the estate and Domaines Barons de Rothschild Lafite has taken on the challenge to revitalize one of the oldest and most beautiful wine-making estates in the Narbonne area. Now his daughter Saskia continues the work her father began. Acquired by Domaines Barons de Rothschild Lafite in 1999, the 1,359 acre Domaine d’Aussières estate has undergone a vast rehabilitation program. 412 acres of vines have been replanted with carefully selected traditional Languedoc grape varieties: Syrah, Grenache, Mourvèdre and Carignan, complemented with Cabernet, Merlot and Chardonnay.

The estate is nestled in the rugged hills just behind the Mediterranean coastline of Narbonne, in the South of France.
The soils are very shallow and rocky on the slopes, and deeper and sandy on the plain. Yields are voluntarily kept very low in order to preserve the vines and ensure the production of high quality grapes. This Chardonnay comes form the coolest plots of Aussières and selected neighbouring terroirs, in order to obtain a wine with distinctive freshness.
The 2021 winter brought lower temperatures than the previous four vintages. The vines were hit by several successive frosts, with a particularly severe one April 7–8 that damaged some of the plots that were relatively advanced in the growth cycle. This was the most intense period of frost since 2017, and the most extensive that Domaine d’Aussières has experienced. The other significant weather factor was the very low rainfall, which delayed the restarting of the vines’ growth after the frost. The soil’s water reserves were only replenished at the very end of the season, after the harvest. These extreme weather conditions delayed the growth and development of the vines and the ripening of the grapes. The harvest started on September 13th and the weather was favorable during the harvests. A few days of rain interrupted the picking schedule, but they were welcome in that they helped the final stage of the late-ripening grape varieties.

Grapes are harvested before daylight when temperatures are at their lowest. After a few hours of cold maceration, they are pressed and fermented at low temperature in stainless steel tanks to preserve their aromatic potential. The wine is partly aged on lees in order to obtain a good balance between roundness and freshness.

Beautiful, bright, clear color with pale yellow and green glints. The nose is full-bodied and rich with aromatics of white fruit and citrus notes mingling with a combination of almond blossom and pink grapefruit. On the palate, the wine is round, fresh, and lively with a hint of acidity and slightly mentholated, aniseed notes. It has the typical minerality and freshness that constitutes the identity of Aussières Blanc.