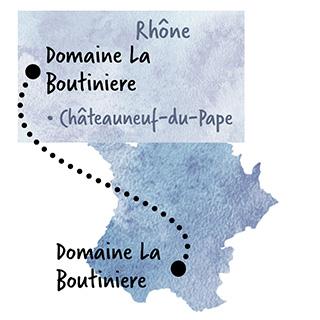 Domaine La Boutiniere was founded in 1920 by Félix Vidal. This family -owned company is now run by Fourth-Generation winemaker, Frédéric Boutin, who has been the owner and winemaker since 1997. Domaine La Boutiniere has 27 acres of vineyards in 8 different parcels within Châteauneuf-du-Pape, including the Crus of La Crau, Le Boucou, Coste Froid, and Roumiguière. Vines are an average of 70 years old and the wines are produced from all 13 grape varieties allowed in the Chateauneuf appellation.

The vines, which average 70 years old, grow at an elevation of 394 feet above sea-level on clay and limestone soils covered with large quartz pebbles called “Galets”. Grapes are hand-harvested and undergo fermentation in temperaturecontrolled cement tanks, pumping over, fermentation period of 1 month, malolactic fermentation in cement tanks. Aged for 12 months in foudre.

A lovely ruby red with notes of mature red fruit and cassis. Beautiful notes of raspberries and balsamic tones lead way to long, velvety notes of vanilla and spice. A rich, delightfully satisfying red wine. Excellent with roasted meats and stews, particularly lamb. Also pairs nicely with barbecue and dishes with spices such as garlic, rosemary and thyme.