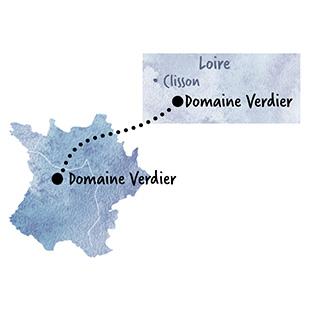 One of the most historic estates in the Clisson region of the lower Loire Valley. At l’Oiselinière vines have been grown for centuries - in fact leases written on parchment dated 1337, 1471, 1505, 1546 have been preserved. On the parchment dated from 1635 in particular, there is the first mention of Muscadet. It is the first known lease today and is written as follows: “Jean de Goulet de la Fosse de Nantes leases to several private individuals from the Parish of Gorges, a piece of land consisting of 78 plots, known as “Les Grands Gâts” dependent on the land of the Oiselinière in order to plant white Muscadet vines.”

Vineyards are uniquely situated on a south facing dome-shaped hill of volcanic schist on the bank of the River Sèvre, close to the confluence of the Sèvre and Maine Rivers. Average vine age is 40-years old, with some nearly 70-years old. Yields are very low. Traditional vinification techniques preserve the full potential of the grapes. Fruit is pressed as soon as it arrives in the cellar; clarification of the must is carried out naturally within 24 hours. Wines are fermented in concrete, temperature-controlled vats using native yeasts and then aged for 9 months on their lees. This maturation method is specific to the Muscadet region and produces purer, more aromatic and complex wines.

This is a fresh and beady wine with an aroma of fruits and flowers while young (apricot, hawthorn). After one or two years of maturing, mineral and iodine flavors emerge, as well as an aroma of fresh melon. In mouth tasting is fresh and pleasant, with a good and lasting taste. Its richness unfolds after a few months of in bottle growing and can be conserved for years. Enjoy as aperitif. Also delicious with seafood, such as oysters, lemon sole, crayfish and grilled fish, as well as with goat and other fresh cheeses.

The wine is aged nine months on its lees.