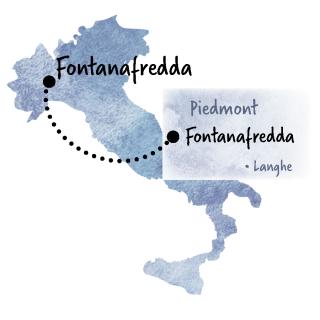 Since 1858, the Fontanafredda Estate & Winery has been instrumental to the growth and international awareness of Barolo, while championing sustainability and community engagement in the Langhe region of Piedmont. Under the lead of visionary entrepreneur, Oscar Farinetti, Fontanafredda has built a portfolio of wines that express the depth and diversity of the Langhe, produced from grapes that are farmed from organic and sustainably managed vineyards. Since the 2018 harvest, Fontanafredda is the largest certified organic winery in Piedmont.

Alta Langa DOCG is Piedmont’s brut sparkling wine made in the traditional method. It is the first traditional method wine made in Italy, first produced during the mid-19th Century. Made with Pinot Noir and Chardonnay grapes, they are farmed from the highest hilltops of the Langhe. Produced in a white or rosé color, in a brut or pas dosé style and aged on the lees for at least 30 months. Alta Langa is always a vintage wine. Fontanafredda’s Limited Edition bottling is sourced from south and southeast-facing vineyards 250-500m asl. Soils are composed of white clay, alternated with layers of sand and limey marl.

Guyot-trained vines are planted at a density of 5,000 plants/ha. Grapes are harvested at the end of August and early September and carted in 20kg crates where they are immediately brought to the press.

Grapes are delicately and softly crushed, and the must is transferred to temperature-controlled tanks where static decanting takes place. Fermentation in stainless steel tanks at low temperatures (64-68°F). Following fermentation, the wine is kept on the fine lees for a few months. In spring the wine undergoes a second fermentation in the bottle, followed by a period of maturation on the lees, with the addition of the liqueur d’expedition. This ageing period covers a span of 30 months, as required for the production of “Spumante Metodo Classico.”

Straw yellow with green highlights. A fresh and fruity wine, the long lees aging produces aromatic complexity. Notes of honey, white peaches, grapefruit and basil. The wine is savory, with a persistent sparkle and a sweet, lingering finish.
Excellent as an aperitif, it is also versatile enough to accompany all courses of a meal.