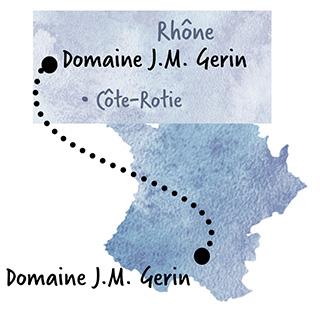 Located in the heart of the Côte-Rôtie vineyards near the village of Ampuis, Domaine Jean-Michel Gerin was created in 1983 with vines inherited from his father and grandfather and they began to bottle and sell under the Jean-Michel Gerin brand.
In 1988 Gerin made his first purchase of vines in Les Grandes Places and added to his holdings in 1989, with the purchase of land on La Landonne. Today, the estate covers nearly 30 acres in the Côte-Rôtie appellation where Jean has now been joined by his two sons, Michael and Alexis.

Rich golden color. Powerful perfume and heady notes of jasmin flowers mingling with apricot blossom and honeycomb. The texture is highly viscous to the point of being almost oily. Unctuous and full bodied on the palate. Explosion of compote of citrus and apricot fruit quickly followed by some granitic minerality. The acidity balances the experience perfectly. Gorgeous and sensuous wine.
Pairs with fish, pasta and poultry in cream sauce; also with veal, pork dishes and creamy cheeses.