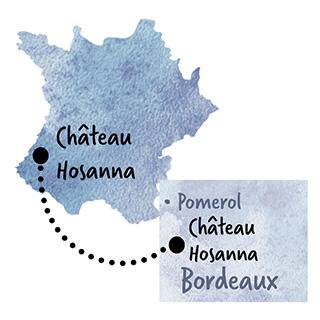 Château HOSANNA deftly marries elegance with depth and could be considered, thanks to the delicate touch of the Cabernet Franc, a feminine counterpart to Château PETRUS.

Château Hosanna is unclassified, but has historically been considered among the great crus of the region. The property is situated south of Château Lafleur, west of Château Pétrus and north of Château Vieux Certan. Sharing its origin with Château Vieux Certan and Château Certan-de-May, the estate was once part of the original Certan property, belonging to the de May family before the French Revolution. For a period, the wine was sold as Château Certan-Marzelle, until it was acquired by the Giraud family in 1956, and was renamed Château Certan-Giraud.
In early 1999 ETS. Jean-Pierre Moueix purchased Château Certan- Giraud and the property was divided into two parts, one of which was sold. The remaining 12 acre parcel, located in the heart of the Pomerol plateau, was renamed Hosanna.

The illustrious and famed Bordeaux negociant firm of Ets. Jean-Pierre Moueix was founded in 1937 and holds exclusive rights to sell and manage some of the greatest vineyards on the right bank of Bordeaux. The properties of Jean-Pierre Moueix can be found in the appelations of pomerol and St. Emilion with each estate being carefully selected by Christian Moueix. The Moueix family have defined a style of winemaking distinguished by integrity and total devotion to the expression of each individual vineyard.

The soil is a beautiful red gravel with layers of clay with vines between 25 and 50 years of age, averaging 40 years. The vineyard is composed of 79% Merlot and 21% Cabernet Franc.

Vineyard work was adapted to the weather: soil tillage was carried out at night in order to limit the impact of heat and drought on the vineyards, and canopy management was tailored to maintain sufficient vegetation to protect the grapes.

The vegetative cycle slowed over the summer months, but rain in mid-september allowed the grapes to reach full maturity. At harvest, the berries were crunchy, gorged with sugar yet fresh at the same time, with intense notes of black fruit, the skins redolent with mild tannins, the seeds crisp.

Deep ruby color. On the nose, notes of chocolate, floral, black raspberry, cherry, oak and plum are present. Soft and velvety with supple tannins and a fairly long finish. A medium to full-bodied appeal, this is silky smooth, seductive, and complex.