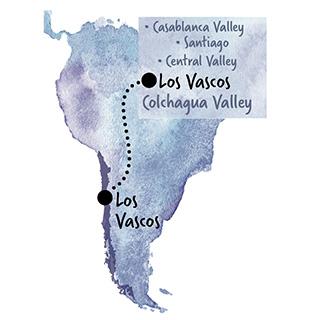 Le Dix, meaning ten in French, was introduced in 1998 to celebrate Domaines Barons de Rothschild (Lafite)’s first ten years in Chile. Le Dix de Los Vascos is grown in the exceptional vineyard, called El Fraile, which means “the monk”, the oldest planted vineyard at Los Vascos and the original vineyard on the estate. The vineyard is 100% planted to Cabernet Sauvignon and many parcels of the vineyard have vines reaching 80 years in age. The vineyard is fairly large, covering some 200 acres, Le Dix is produced from severely reduced yields from El Fraile (the best) combined with the most rigorous cuvee selection - the resulting wine is of world class stature.

Los Vascos is located in Valley de Caneten (Colchagua), a closed valley in the central zone of Chile, approximately 25 miles from the sea. The valley provides a perfect microclimate for high quality viticulture, with Northern exposure to lands uncontaminated by airborne or water-borne pollutants. Daily on-shore winds provide temperature changes between 68-77°F, for optimum maturation of the grapes. With 1,581 acres planted on the over 10,000 acre estate, it is one of the largest vineyards in the central Colchagua valley, at the foot of Mount Cañeten.

The season began with a relatively dry winter, with a cumulative rainfall of only 12”, almost half that for last year. Temperatures during the winter varied between 34°–70°F, which is consistent with normal averages. Spring was generally warm in the region, with temperatures reaching 86°F. The presence of high temperatures combined with the low rainfall during the winter resulted in the decision to bring irrigation forward to the spring. The high temperatures continued into the summer, so the harvest took place from March 21–25, nearly 20 days earlier than in the previous season.

Le Dix is made with the utmost care, just like the Bordeaux Grands Crus. Grapes are carefully selected and hand harvested. After destemming, they are placed in temperature controlled stainless steel vats for alcoholic fermentation. During maceration gentle pump- over are performed when necessary for a gentle extraction of the tannins and colouring compounds.

Malolactic fermentation occurs naturally in tanks, then the wine is transferred into French oak barrels made by the Tonnellerie des Domaines in Pauillac (60% new oak) for a period of 18 months. This wine will reveal its complexity with further bottle ageing. Cellar in good conditions for up to ten years or more.

This wine has a deep ruby red color. The nose is beautifully complex with notes of plums, cherries and liquorice with spicy undertones of nutmeg, cinnamon and white pepper.
On the palate, the wine shows a good volume and structure with nice mature tannins balanced by a good concentration. The Le Dix 2017 shows good ageing potential. Serve at 60-65°F.