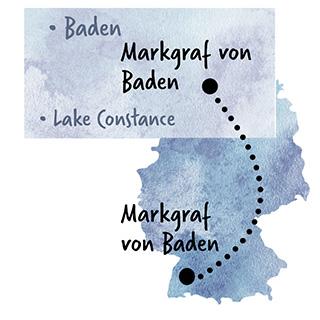 The region of Baden, where Markgraf Von Baden vines are nurtured and grown is named after the Baden family. The family has been committed to Baden for over 900 years. From early on, the Margraves promoted winegrowing — through the creation of wine standards and laws, innovative agricultural methods and the introduction of new grape varieties. Built in 1134, the castle in Salem was used as a monastery. The origin of the monks lay in Burgundy and they brought viticulture to Salem. In the Middle Ages about 310 monks lived in Salem and managed over 2,500 acres of vineyards. In the course of secularization, the Margraves received the castle from Napoleon Bonaparte as a compensation for lost territories. In 1802, the Margraves came to Salem and promoted viticulture. The history of wine in the region is a core part of our heritage and today is the motivation and inspiration to build for the future. This is reflected in our family motto: “Fidelitas” — Loyalty!

The vineyard is over 60 acres. Steep terraced slopes from the castle (55% to 60% slope). Soils consist of granite, with light minerals and clay. Over 1,700 hours of sunshine a year. All grapes are delicately picked by hand. Produced following the strict organic regulations of Germany, from over 100 variegated historic Riesling cuttings. Aged nine months in stainless steel tanks.

Bright golden yellow. Notes of ripe peaches, lime and pear. This wine is complex and powerful.