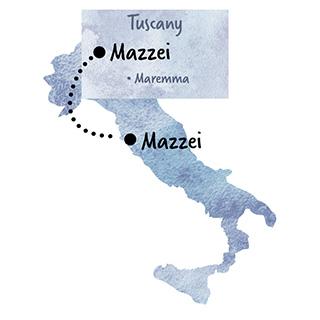 For 26 generations, the Mazzei family has been producing benchmark Italian wines from their historic Castello di Fonterutoli estate in Tuscany and more recently in the Maremma, Sicily and the Veneto. The passion, commitment and expertise that goes into these expressive wines is a reflection of the Mazzei’s spirit of innovation and respect for each property’s unique terroir.

This wine is dedicated to the family’s most notable ancestor, Philip Mazzei (1730-1816), an illustrious political thinker, philosopher and winemaker. A close friend of Thomas Jefferson, he planted the first vineyards at Jefferson’s estate in Monticello, VA. Philip’s political writings were influential to the soon-to-be president, particularly on matters of equality. Philip advocated that, “all men are by nature equally free and independent,” which later served as an inspiration for the writing of the U.S. Declaration of Independence. In his honor, the Mazzei’s developed Philip, a Cabernet Sauvignon made from a blend of grapes grown at Castello di Fonterutoli and Belguardo, their two estates in Tuscany.

The Mazzei’s Tuscan estates include Castello di Fonterutoli in Chianti Classico, characterized by mainly limestone soils. Half of Philip comes from these estate vineyards. The other half is sources from their Belguardo property in the Meramma, roughly six miles inland from the Tyrrhenian Sea. Soils here are primarily composed of sandstone.

The wine is combined and aged 18 months in French and American oak barrels (225 lt / 30% new), followed by 6 months bottle ageing.