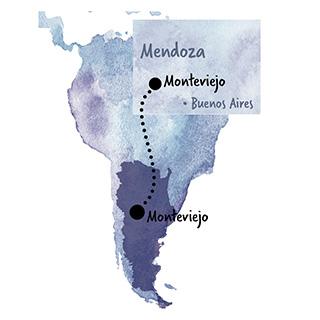 The Pere Verge family, more than just being owners of Monteviejo, Château Le Gay and Château La Violette, are a family devoted to making exceptional wines of terroir, power and elegance. Following the hemispheric seasons, winemaker Marcelo Pelleriti and his team are producing world class wines both in Mendoza and Bordeaux.
The land comprises 130 hectares at between 1000 and 1200 meters above sea-level in Vista Flores, Tunuyan, 120km south of Mendoza city. The land’s slopes face the North and East giving them better sun exposure in the Southern Hemisphere. Ideal for high altitude grape growing.

Monteviejo counts on a gravitational system with a double selection table for bunches and grapes. The objective is to transport the raw material without using pumps, taking care not to damage it in any part of the process.

From the harvest to the bottling—passing down through barrels for ageing—the wine moves along the natural gradient. It is only the weight of the grapes that is used to move them from above to below.

In December of 2008 the vineyards received heavy rainfall which helped offset the otherwise dry 2009 growing season. Temperatures were moderate with warm clear sunny days followed by cool breezy evenings. 2009 was an ideal year for hidric stress management in the vineyards which allowed us to produce phenomenal fruit. 2009 will be remembered for producing wines of equisite texture, rich powerful aromas and exceptional balance.

Bunches are selected via a double belt system. Microvinification occurs in French oak barrels. Five percent of whole bunches are used during the fermentation which accentuates the freshness of the wine. Cold maceration at 8°C during 10 to 15 days followed by fermentation with natural native yeasts, pigéage (punching down), and daily rotations at varying intensities depending on process stage.

Intense, with elegant texture through the mid palate, great tipicity, highlighting its mineral character due to the co-fermentation process with malbec.