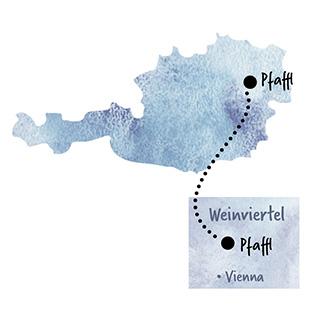 Pfaffl stands for consistent high quality. The Pfaffl family’s greatest strength is family unity. The family focuses on crafting impeccable wines that reflect authentic Austrian terroir through their depth, minerality, and balance. Everyone plays a fulfilling role in which they can evolve. Roman Josef Pfaffl is the winemaker, and his sister Heidi Fischer oversees the commercial side. Father Roman Pfaffl looks after the vineyards and mother Adelheid watches over the newest generation. The family’s teamwork was evident when they won the prestigious honor of being named Wine Enthusiast’s “European Winery of the Year 2016,” a first for an Austrian winery ever.

For close to 40 years, the Pfaffls have been ambassadors for highquality Grüner Veltliner, Riesling, Chardonnay, Zweigelt, and St. Laurent. In just under 20 years Roman Pfaffl ambitiously grew a little farm with less than 2 acres of vines into a nearly 50 acre wine estate, meandering through 10 villages throughout Weinvertel.

Biodiversity is important to Pfaffl, with a simple idea: the more biodiversity there is in the vineyard, the healthier the entire ecosystem is. The vineyard contains selected flowering plants to compete with vigorous grasses that provide a habitat for the beneficial insects amongst the vines.

The vineyard is a south-facing slope situated directly nearby a forest resulting considerable temperature differences between day and night. The soil consists of slighty sandy loess. Vines are approximately 43 years old and are cultivated in a dense of around 4.000 vines/ha. To profit from the rising ground-heat and to reach a high foliage-wall a trellis training system is used at about 60-90 cm and the guyot cutting system used.

2020 started with an extremely dry winter followed by an equally dry spring. The turning point was in May, when rain set in; an extraordinary amount of rain fell throughout the rest of the year, which was beneficial to the freshly planted vines. There were several short, hot periods in between the regular rainy days. Vintage 2020 is a classic Austrian vintage with a great fruitiness strengthened by a ripe acidity. A vintage with distinctive varietal typicity and a lot of minerality.

The harvest took place at the beginning of October. Grapes were destemed and squeezed and must stood for two hours before being pneumatically pressed by at low pressure. Fermentation took place with automatic temperature-control at 66°F. Storage in stainless steel-tanks; after four months the wine was bottled.

Bright sparkling yellow with green reflexes, beautiful and charming fragrance of black pepper, accompanied by citrus and field herbs. Juicy and crisp on the palate; very refreshing. A spicy finish, it pairs well with everything from tender fish sandwiches to oriental dishes.