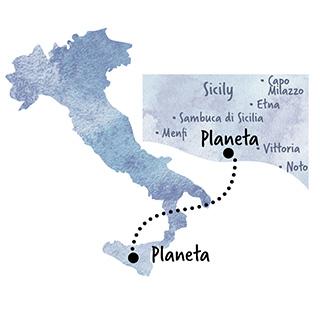 Planeta’s journey began at Sambuca di Sicilia, on the estate owned by the family since the 1600s. Here, three enthusiastic young Sicilians, Alessio, Francesca and Santi Planeta, under the guidance of Diego Planeta, began their winemaking venture in the mid-1980s. Subsequent years were spent matching the extraordinarily diverse Sicilian soils with both indigenous and international varieties. Planeta today encompasses six distinct wine estates in five regions across Sicily; Vittoria, Capo Milazzo, Etna, Noto and Menfi- each one inspired and constructed in harmony with its surroundings and dedicated to its terroir.

The history of Etna is studded with the historic eruptions which have shaped it. The eruption of 1614, lasted ten years and is the longest ever recorded, halted right on the border of the vineyards of Sciaranuova. This Metodo Classico is produced from indigenous grapes cultivated in a climatically appropriate environment. Carricante harvested early and processed with the greatest care.
The volcanic soils of Etna originate from the slow breaking down of the lava rock, from the abundant presence of ashes emitted from the crater and from organic substances. They are rich in stones and minerals. The quantity and dimension of the stones varies a great deal on the different terraces as does the depth of each type of soil. In every case fertility and complexity are the common denominator in the different soils of our vineyards in the Etna area. The land has perfect aspect and position, black soils with lava sands and due to this, extraordinarily rich minerals; surrounded by woods and more recent lava flows. The vines used to make this wine actually grow on the lava flow.

Harvest occured September 20th. The grapes are hand harvested early into crates so as to preserve acidity; then they are destalked and undergo soft pressing, the must decanted is racked and inoculated with yeasts, it ferments at 15°C in stainless steel vats, the wine thus obtained remains on the fine lees with continual stirring until January, at the end of March it is prepared for the ‘tirage’ and is bottled; it remains on the lees for an average of 20 months, at 12° C, and is then disgorged.

Floral aromas, which are never overpowering, and citrus fruit with great mineral power that supports a refined and lasting ‘perlage.’ The wine flows smoothly and softly with a delicate flavour of citrus and passion fruit. A surprising and enchanting taste, rich and at the finish punctuated with aromas of the Mediterranean macchia.
A perfect wine to begin, or finish, any evening, its acid freshness allows it to venture where many vines cannot dare as with an omelette or dishes of particular oiliness.