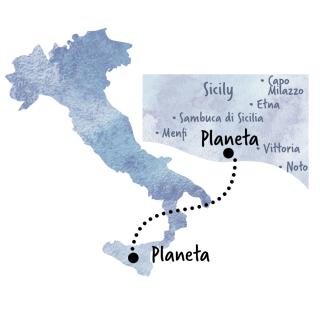 Planeta’s journey began at Sambuca di Sicilia, on the estate owned by the family since the 1600s. Here three enthusiastic young Sicilians, Alessio, Francesca and Santi Planeta, under the guidance of Diego Planeta, began their winemaking venture in the mid-1980s. Subsequent years were spent matching the extraordinarily diverse Sicilian soils with both indigenous and international varieties. Planeta today, encompasses six distinct wine estates in five regions across Sicily; Ulmo at Sambuca di Sicilia, Dispensa at Menfi, Dorilli at Vittoria, Buonivini at Noto, Sciara Nuova on Etna at Castiglione di Sicilia, and the newest addition, La Baronia at Capo Milazzo. Each vineyard site is carefully cultivated with grapes that best compliment the local terroir.
Controdanza, from “country dance”, is a traditional rural dance where partners move gracefully together and then in opposition to each other. Thus we imagined an association of Nero d’Avola and a small amount of Merlot, both cultivated in Noto’s white soil. An unconventional combination, balanced between harmony and contrast.

Extensive research to find the best terroir to cultivate Sicily’s most important grape variety, Nero d’Avola brought us to Noto, where the DOC Noto insists the variety originates, at the southern extremity of Sicily. Noto was the third stage of the Planeta Family’s journey in Sicily. In 1998 we founded our estate, which coincidentally has always been called ‘Buonivini’. The soft hills of Buonivini, white limestone soil with an abundance of small stones, breezes arising from the meeting of two seas, create the best conditions to make the vines grow successfully. Here Nero d’Avola and Moscato grow together with almonds, carobs and olives, symbolic plants of the Mediterranean location.
This wine is produced from the heart of the DOC Noto area in the old districts of Buonivini and Agliastro where Nero d’Avola has always been cultivated. A sort of ‘cadet’ to Santa Cecilia, and the perfect expression of the territory in a less extreme but always original version.

Harvest took place between September 15th and 20th. Destalking was followed by 14 days lying on the skins; fermentation at 25°C, after racking malolactic fermentation in stainless steel.
The wine is aged for 10 months in two- and three-year old Allier oak barriques.

Typical notes of Nero d’Avola from the Noto area like mulberry and plum together with bay, incense and balsamic notes being balanced and made lively by the addition of a vibrant Merlot produced on the same calcareous soils. Harmonic acidity and soft tannins are characterising the palate.
From pork to lamb, the wine expresses itself best with all grilled meats. To be tried with a traditional recipe such as ‘salsiccia sul coppo’ or in a playful pairing with sweet and sour sauces.