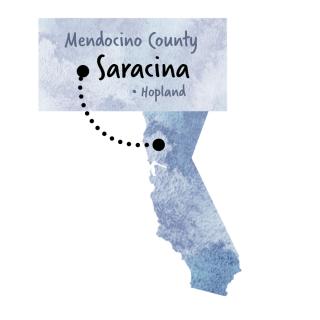 Saracina is located along the Upper Russian River in northern California’s wine country. The 400-acre ranch which includes a winery and sustainably farmed vineyards, is also home to a 140-year-old olive trees, vegetable gardens, beehives, and local birds and wildlife. The handcrafted, limited production Saracina wines reflect a conscious sense of this beautiful place in Mendocino County. Founded by husband and wife team John Fetzer and Patty Rock in 2001, Saracina has always been defined by a strong sense of family. In 2018, Marc Taub took on stewardship of Saracina, upholding the spirit of family ownership that has defined this iconic Mendocino County winery since inception.

Old Soul Red by Saracina is a nod to Mendocino County’s adventurous history of exploration and discovery.
The Zinfandel comes from two vineyard sites. The Chapman vineyard is certified organic, with head-pruned vines that sit on an alluvial bench in Redwood Valley. The Sawyer vineyard sits at 1000’ feet elevation overlooking Lake Mendocino planted with head-pruned vines with St. George rootstock.
The Malbec is from Saracina estate vineyard which are marked by black clay and gravelly soils at the base of the foothills. The Petite Sirah is from both Saracina’s steep hillside vineyards and the Niemi vineyard with 20 year-old vines, originally planted without irrigation and dry-farmed for 15 years.
The harvest of 2019 was a winemaker’s dream, with early replenishing rains and a long and even growing season. Picking began on September 21st ar the estate’s Pick and Shovel Zinfandel block and adjacent hillside Petite Sirah block; Harvest began with the Malbec on September 23rd and finished with Niemi Petite Sirah on October 3rd.

The grapes were picked at full maturity, de-stemmed and gently transferred into fermenters with almost 100% whole berries. The must soaked at a cool temperature for 4–7 days, at which point native yeast fermentation began. Post-fermentation maceration with heat followed for approximately one week. The wine was aged in both Burgundian and American four-year-seasoned oak (10% new) for 18 months, which included five months of native malolactic fermentation. The blend was assembled and bottled in June of 2021.

Inky purple in color, this is a sensational vintage of Old Soul Red, with blackberry cobbler and savory notes on the nose. The palate is rich and dense, with ripe tannins that wrap around the core of fruit and lend to a long juicy finish. The hallmark of a thoughtfully articulated blend is its versatility; This wine would be equally brilliant with pollo asado tacos as it would with a sophisticated mixed grill and roast root vegetables.