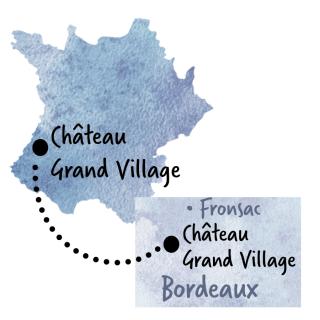 Jacques Verdery, a remote ancestor of the Guinaudeau family, founded Château Grand Village in 1650. This vineyard is in fact the birthplace of the family of vignerons. The estate is situated in Mouillac, a part of the canton of Fronsac, and covers 50 hectares of land. This surface is divided between 20 hectares of vineyard positioned on the plateau and gentle slopes of Grand Village, and 30 hectares of woods and meadows.

Jacques Guinaudeau and his wife Sylvie took charge of Château Grand Village in 1980. For the last twenty years they have been writing a new chapter in its story. Then their son Baptiste and his wife Julie joined in the beginning of the new millennium, and together they embarked on a new adventure, taking a bold decision to work the vineyard and vinify the wines of Grand Village with the same approach and philosophy as Lafleur. Château Grand Village quickly became a singular wine, a down to earth Bordeaux crafted with the means and in the spirit of a grand cru.

Soil and sub-soil: 14 hectares of clay-limestone soil. The vineyard is farmed under sustainable viticulture.

Merlot was harvested September 23rd to 28th, Bouchet was harvested October 3rd and 4th. Hand harvested with double sorting at the vineyard and a third sorting in the cellar. Alcoholic fermentation in stainless steel and concrete tanks with soft maceration (15 to 25 days) and moderate tannin extraction. Blending of the reds took place in early winter, and they were ready to be tasted in the following months.

Château Grand Village today is a complete and honest wine, without artifice. Harmonious and with great balance, enjoy the wine in its youth. Yet, with a few years in bottle, start appreciating more and more its refined and mineral tannic spine, which make the wine really the “Grand Village of Lafleur.”