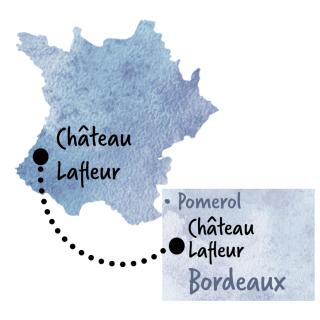 Château Lafleur is located at the crest of the Pomerol plateau directly adjacent to Château Petrus and contiguous to Châteaux La Fleur Petrus, Le Gay, Vieux Château Certan and Hosanna. The vineyard is 11.12 acres “d’un seul tenant”- one contiguous parcel. The indescribable complexity of Château La Fleur comes from the great diversity of its soil types: a gravel slope to the north west, a clay-gravel soil toward the south, a gravel-sand soil toward the east and a rich vein of marl toward the center of the vineyard. The vineyard is planted to Merlot (50%) and to Cabernet Franc (50%) one of the highest percentages of this varietal in the appellation. The vines average 30 years in age. Density is on average 5,900 vines per acre.

Château Lafleur is owned and managed by the Guinaudeau family. The tiny vineyard dates back to 1872, when Mr. Greloud, Mr. Jacques Guinaudeau’s forebear, owner of Château Le Gay, purchased Mr. Bernier’s parcel. With the meticulous attention of Jacques and Sylvie Guinaudeau, helped by their son Baptiste, the wines continually express the natural depth and complexity of this unique vineyard.

A strict and merciless parcel selection precedes the harvest which is conducted entirely by hand, vine by vine, and often bunch by bunch. A sorting table is used systematically to assure a selection of only the healthiest grapes. Vatting and maceration are conducted according to the needs of the vintage; racking into barrels is immediate following fermentations in a minimum of 50% new oak. The wines are clarified (racked) by hand every three months and remain in barrel for 18 months before bottling.

Intense and distinguished aromas of truffle, stone, smoke, firewood, charcoal and smoke. This medium-full bodied Pomerol is supple, round and drinking perfectly today. The wine ends with a soft, pure, black cherry and chocolate finish.