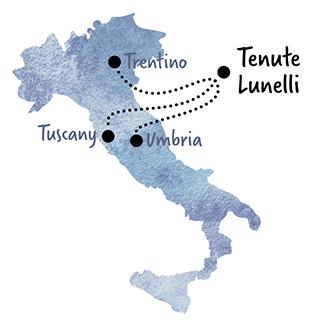 The Lunelli family, third generation of winemakers at Ferrari Trento DOC, have pursued their passion for wine with the creation of Tenute Lunelli, comprised of three wine estates located in three different regions of Italy, Umbria, Tuscany and Trentino. Only the Umbria estate wines from Tenuta Castelbuono are currently available in the US. The winery is a realization of sculptor Arnaldo Pomodoro and the technical expertise of architect Giorgio Pedrotti. The huge dome covered with copper, marked with a pattern of grooves and cracks, is inspired by a carapace, a tortoise shell. An accompanying sculptural element in the shape of a red arrow (called the Lampante) piercing the earth highlights the structure in the surrounding landscape.

The Castelbuono property encompasses approximately 74 acres of vineyards in the areas of Bevagna and Montefalco. Since acquiring the property, the Lunellis have focused on converting the vineyards to organic agriculture.

A land-locked area in the heart of Italy, Umbria has a similar climate and geography to Tuscany, with cold, rainy winters and dry sun-filled summers. An exception is the area surrounding Lake Trasimeno and Lake Bolsena, where a mild, Mediterranean microclimate dominates.

Umbria’s native Sagrantino is a unique grape variety, a vivid combination of tradition and innovation, unmistakable for its power and aromatic body. At Castelbuono, historic old vines are preserved and new vines are added through a structured cloning selection project called the “Patriarchs Project.”

Aged for 18 months in tonneaux and large casks, followed by a minimum of 12 months.

Ruby red color with hints of garnet. Intriguing on the nose, with scents of wild violets and cherries in brandy, along with sweet spiciness against a background of graphite. The wine explodes on the palate with round, elegant fruit and well-structured, ripe, and well-balanced tannins. Its long, broad finish suggests that it still has considerable potential for aging.