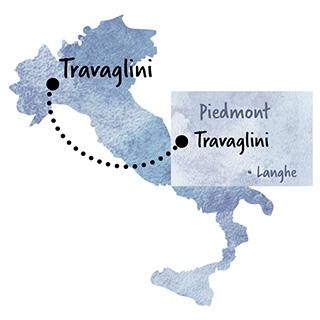 Driven by a passion for exceptional Nebbiolo, the Travagli family has been producing remarkable, limited-production wines from their eponymous estate in Gattinara for four generations. Gattinara plays an important role in Italian viticulture, but until a couple decades after the turn of the century, this beautiful region of Alto Piemonte was nearly forgotten. A winemaking region older than Barolo, Gattinara covered almost 600 hectares by the end of the 1800’s, making it one of the largest in Northern Europe. The phylloxera plague, coupled with a devastating hail storm in 1905, completely destroyed the region and wine production in Gattinara was abandoned.

Versatile and young, this wine has refreshing acidity and soft tannins. Deep ruby red color with garnet reflections. On the nose, aromas of red fruit, blackberry, plum and licorice with hints of vanilla and leather. On the palate, full-bodied, with intense flavors of cherry, raspberry and spice culminating in a long and smooth finish. Outstanding with red meat, game and hard cheeses.

Recommended ageing up to 5 years.