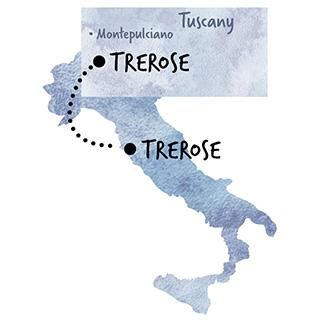 The Vino Nobile production zone is positioned on a hilly ridge between Val di Chiana and Val d’Orcia at altitudes between 820 and 1900 feet. The climate is largely influenced by the nearby Trasimeno Lake, with soils composed of marine fossils, sandstone, salt rich clay and precious silt deposits.
Today the estate covers 445 acres, of which 193 are under vine. 136 acres are dedicated to the production of Vino Nobile DOCG with the remainder used for production of Rosso di Montepulciano DOC and other wines. The production zone for this wine is Valiano di Montepulciano on the Santa Caterina hill, an area rich in sandstone and salty clay. The vines are spur-cordon trained and average 20 years.

The wine is aged for 12 months in 60-70 hl barrels followed by 12 months bottle maturation before release.

An intense ruby-red color with purplish tints. The nose is an explosion of red and black fruit – cherries in liqueur, redcurrants, blackberries, myrtle orange and myrtle – paving the way for a plush, palate. The finish is long and captivating. Ideal with meat stews, chargrilled red meat and mature cheese.