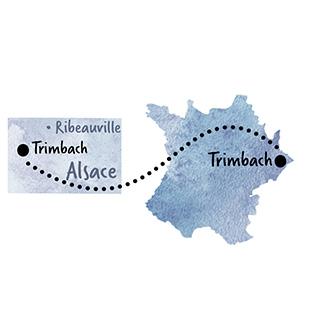 The Trimbach’s have a purist vision. For three centuries and across 13 generations, the family has produced wines that are structured, longlived, fruity, elegant and balanced: the celebrated Trimbach style. The family personally looks after each operation, from planting to harvests and from vinification to bottling. The viticultural origin of the Trimbach family dates back to 1626, when Jean Trimbach, was recognized as a citizen of Riquewihr. From then on, the Trimbach’s were renowned for their wine-growing. Maison Trimbach’s vineyards are all situated around Ribeauville (Ribeauville, Hunawihr, Bergheim, Rorschwihr, Riquewihr and Mittlewihr). They benefit from the unique Alsatian microclimate, thanks to the Vosges Mountains protection, which preserves the plain from the rain. The vineyards were planted on the Ribeauville’s fault line that fractured 50 million years ago between the Vosges Mountain range and the Black Forest offering a mosaic of terroirs including the complex calcareous limestone and bio-degraded seashell fossils called “Muschelkalk.”

We have been leasing the Vineyards of the Convent of Ribeauvillé for several years now. In 2009, we have produced our first Grand Cru Geisberg. Pierre Trimbach and his team have been working the Grand Cru Geisberg behind the domaine for years, this one being assembled wit GC Osterberg into the famous Frederic Emile. Their knowledge of this terroir has enabled them to produce a great wine on these 2,66 Ha from the Convent. The Geisberg is a jewel of Alsace. Located in between two other Grands Crus on Ribeauvillé's fault line, the limestone and sandstone subsoil, the old vines, the exposure to the sun and the small steep terrasses make it a very unique and complex terroir of only 8,5 Ha total.

The wine is intense and has a great energy. The color is bright-electric with silvery shimmers. Although the first approach on the nose is discreet with white flowers notes, the diesel-like minerality soon emerge with broad almost-oily shoulders to match it. A direct characteristic of the Geisberg parcel. On the palate, the attack is unctuous and ample with saline notes adding elegance to a very structured wine. A gastronomic wine able to age between 10 to 30 years in the top vintages.