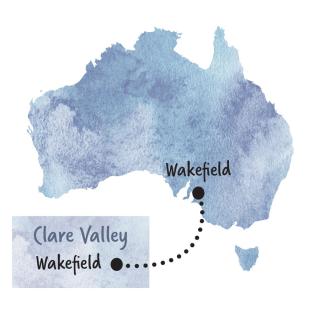 The Promised Land name comes from one of those classic “over the fence” chats that neighbors have. In 1969, founder Bill Taylor had recently established his winery, but was already looking beyond his vineyards to see how he could expand his Clare Valley estate. His neighbor to the east had a beautiful patch of land, with gentle rolling hills and soils perfect for grape growing.

Upon visiting him, Bill struck a deal that he’d be the one to purchase the land, should his neighbor ever decide to sell it. After a good long wait - almost twenty years later - the neighbor decided to sell his land and he kept his promise to Bill. These new Wakefield estate vineyards became forever known as ‘The Promised Land.’

Launched in 1998, the Promised Land range pays homage to the discovery of fossilized seahorses on the family’s estate, and the promise of its rich fertile soils. The wines are designed to be full of robust flavor accessible to any wine lover. The fruit is sourced from premium South Australian regions but is still typically Taylor's: award winning quality, smooth, easy drinking and amazing value. For its 20th anniversary, this iconic range received a contemporary and striking new design, painted by Australian artist Catherine Abel.

Grapes for the Promised Land wines are sourced from across South Australian regions such as Padthaway and the Limestone Coast. South Australia is considered the “historic heart” of Australian winemaking, home to the country’s premier growing regions and historic estates. With a focus on typicity and low intervention winemaking, the exceptional Cabernet Sauvignon, Shiraz and Riesling wines produced throughout the region stand with the top wines of the world. The region makes up almost 50% of Australia’s total wine production and is home to the oldest vines in the country.

Fermented in stainless steel and gently mixed twice daily using inert gas. Following malolactic, the wine was transferred to used oak barrels for a short maturation period. The wine is gently fined and filtered before bottling.

Crimson red. Vibrant spicy aromas of red currant, plum and a touch of spice. Juicy blackcurrant fruits along with subtle coffee and savory cedar flavors and a smooth gentle finish. Distinctly flavorsome and true to its varietal origins – but at once soft and approachable. This is the sort of wine you know you should share but just want to keep to yourself.